Weekly Shōnen Jump magazine is one of the most popular and long-running manga magazines in Japan. It is published weekly, and generally includes one chapter for each of its ongoing series'. It's a shōnen magazine, so its demographic is young teenage boys, and the content tends to be action-oriented. It has published some of the most popular shōnen manga series, including One Piece and Naruto.

It is part of the Jump line of magazines that includes titles such as Jump Square and Akamaru Jump, which occasionally release Weekly Shōnen Jump series-related content as well.

Note: While each issue has an official date on the cover, they go on sale as much as a month earlier. For instance, the first chapter of Death Note was published in the No.01 issue of 2004, dated January 1st, but it actually went on sale in stores on December 1st, 2003. Weekly Shōnen Jump goes on sales on Mondays, except when that Monday is a national holiday, in which case it goes on sale two days earlier. (See 2004 issues 34 and 43, and 2005 issues 16, 33, 42, and 45.)

The cover of each Weekly Shonen Jump issue is commonly dedicated to one of the manga series' currently being published. Death Note had several covers during its run, and it featured as the first cover of the year for its entire run between 2004-2006.

In addition to Death Note being featured prominently on covers, Death Note character have been part of various ensemble covers that feature a number of characters from various Weekly Shonen Jump titles.

Issue No.05-06, 2005, New Years celebration cover; L and Light are in the upper left of the ensemble image

Issue No.11, 2008, featuring Gintama on the cover. The one-shot chapter and the movie L: Change the WorLd are noted in the lower right side of the cover.

In addition to featuring in Weekly Shonen Jump, Death Note has been included in other Jump magazines. Akamaru Jump featured the yonkoma (short four-panel comics) for the series. Jump Square featured a cover of L and a poster of Near for the one-shot epilogue in 2008, and a new cover and color insert of Ryuk and Minoru Tanaka for the later one-shot chapter in 2020.

Changes made during manga release

In an interview featured in Death Note 13: How to Read, Takeshi Obata details changes that are made between the serialization of Death Note in the Jump magazine and its official book release.

"[...] The thing with preparing pages for a magazine is that you often do pages out of order based on what will get things finished fastest. That's why I'll sometimes go back and fix things I missed before the series is released in the graphic novel format. For example, sometimes I won't like the angle of a character's face.[...]" (HTR13, p.123, q.1)

In accordance with this statement, there are several minor changes that were made through the series. In the Yellow Box Warehouse scene, Light Yagami sports a different pose as compared to the final manga counterpart.

Perhaps most jarring of a change comes from Near's panels early on into his appearance. While his expression differences only occur during his phone calls with Light, Near's expression are a lot more childish and mischievous as compared to the final manga release.

Death Note is a prominent manga and continues to be featured in some Jump-related events.

Death Note: The Escape was a Death Note-themed attraction held during the event. It was an escape room game in which players solve puzzles to "escape" Kira in a Sakura TV building. It was related to the new film Death Note: Light Up the NEW World.

The "Universal Jump Exhibition" was an attraction during the event, showcasing some of Shounen Jump's prominent manga. It featured Death Note items related to the new film, including Ryuzaki's mask and a Death Note from the film.

Jump is holding a series of events in 2017-2018 to celebrate their 50th Anniversary.

The "50th Anniversary CD" Vol. 1 features a cover of various characters including Light, and track #22 is "What's up, people?!."

The mobile game Jumputi Heroes was released March 28th, 2018. Death Note characters first became available in the game at the end of May.

From July 7th to September 30th, 2018, the "Shōnen Jump Exhibition Vol. 3" will be up featuring Jump series' from the 2000s, including Death Note.[1][2][3][4]The event had "fan appreciation" days for specific series', and Death Note's fan appreciation day will be August 24th. Seven souvenir certificates will be available to visitors on that day.[5]

The console game Jump Force was announced at E3 as part of the 50th anniversary celebration. It's a crossover fighting game that will feature various Jump characters including Light and Ryuk. The Death Note characters are included in the game for the story, and they will not be playable.[6] The game is anticipated for release in 2019.

Ad for the Death Note One-Shot Special in 2008

Ad for the Death Note 2015 television drama, announcement of the main casting

Ad for the Death Note All-in-One Edition in 2016

Color ad for the film Death Note: Light Up the NEW World[7]

Poster for the film Death Note: Light Up the NEW World, 2016

Ad for the Othellonia collaboration event in September 2017 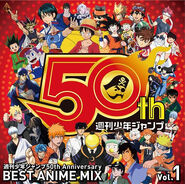 Death Note-themed food at the Shonen Jump 50th Anniversary Cafe Vol. 3. The burger has a slice of apple, and the chips are consomme flavored.[8]