Paul Nakauchi
Watari (ワタリ, Watari) is L's handler and the supplier of logistics to the Japanese Task Force. He is also the founder of Wammy's House, an orphanage that has produced some of the best detective minds in the world, including L, Beyond Birthday, Mello, Near, and Matt.

Watari has white hair and gray eyes. When in disguise as L's assistant, he wears a long black trench coat and a hat that covers his face. After he reveals his appearance to the Japanese Task Force, Watari wears a black tuxedo with a black hat and glasses.

Watari is a famous inventor and the founder of Wammy's House, an orphanage for gifted children in Winchester, England. Using the fortune he made as an inventor, he built an orphanage that teaches children with special talents and sends them out into the world. Before the Task Force is formed, he is the only person known to have seen L and the only one capable of contacting L directly. Like L, he represents himself with a Cloister Black "W" on computer screens. Since L's time at Wammy's House, Watari has been a fatherly figure to him, though in his role as L's handler he acts as a butler. Watari is well-trained in espionage and marksmanship. According to Death Note 13: How to Read, Watari-Senpai likes Earl Grey tea and dislikes dirty rooms.

Watari first appears during an Interpol emergency meeting, informing the officers present that L is currently working on the Kira case.[1] During the NPA's meetings with L, Watari serves as the middleman for the officers and L.

When the Task Force diminishes in numbers and the remaining members meet with L in person, Watari appears without his disguise, in a tuxedo. He is responsible for handing out the counterfeit badges and belt buckles, under L's orders.

When L asks Light Yagami to join the Task Force, L asks Watari to never appear in person to the Task Force when Light is around and to speak with L through the laptop, as per L's strategy of having Light think there may be more than one L. (This strategy of L's is absent from the anime. Rather, Watari constantly serves L sweets throughout the anime.)

During the Yotsuba Kira case, Watari prevents Higuchi from holding himself hostage when he sniped Higuchi's pistol out of his hand.

Light, as Kira, manages to subtly blackmail Rem into killing L; Rem, wanting to ensure Misa's safety, kills Watari, an act not expected by Light. During his heart attack, Watari presses a kill-switch button which causes deletion of all data at Task Force headquarters. L told him to do this if something 'strange' were to happen to him.

Watari appears in the first three films of the Death Note film series in much the same role as in canon. In Death Note: The Last Name and L: Change the WorLd, Watari dies of a heart attack in the elevator while bringing Misa back into headquarters for questioning. When Watari dies, L realizes that Light is making his move, allowing L to fake his death at the right moment to trick Light. Watari's death deeply upsets L, and he regrets that he didn't realize that Light would target him.

Wammy's House is notably different in the film series, and many other talented individuals were brought up there as part of Watari's vision to make the world better. After Watari dies and L solves the Kira case, L emails several other Wammy's House members to inform them of his death. K replies instantly, saying that she will mourn him. Watari's death notably affects Kimiko Kujo, and L uses Watari's belief for her as leverage to get her to reconsider her actions.

J later brings him up in attempt to help Ryuzaki in the Death Note: New Generation episode Ryuzaki's Chapter: Dying Wish, saying she would help Ryuzaki the way Watari helped L. Ryuzaki turns down J's offer because one of L's biggest regrets was that Watari had to die, so Ryuzaki will not make the same mistake.

In the films, he is played by Shunji Fujimura, who felt that Watari's presence would "come alive" if he projected "the mood of this mysterious old gentleman without the air of livelihood."

In the novel L: Change the WorLd, Watari has a notable presence posthumously and it's clear that he was very important to L. At the end of the novel, just before L's death, L imagines that he is playing chess with Watari.

Watari is portrayed by Kazuaki Hankai in the 2015 Death Note television drama. As in canon, Watari offers personal assistance to L, making arrangements related to the case. Unlike canon, there is no reference to the existence of Wammy's House. Instead, Watari personally adopted both L and Near.

After L's death, Watari continues to help with the case and assists Near. He shares L's videos as needed with others. Although Near/Mello appears to betray Watari soon after, Watari assists Near again, in the end, to help catch Light.

Watari survives in the series.

Watari is played by Paul Nakauchi in the Netflix's 2017 Death Note film. He is reimagined as much younger and a father figure as well as assistant to L. As a result, he and L appear to have a much closer relationship as L starts to lose his composure when Watari goes missing, and ultimately seeks to outright kill Light in revenge after he finds out Watari is dead.

His role is mainly the same as in the anime and manga, except he is integral to Light's attempt to find out L's name. Light writes Watari's name in the Death Note and makes him go to the remains of the orphanage that L grew up in. Light intends to spare Watari by burning the page with his name on it after Watari gives him L's name, but Mia takes the page, so Light is unable to save Watari, and he is killed when he is shot multiple times by a Task Force who was looking for him.

Shunji Fujimura as Watari in the film series 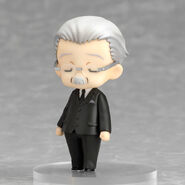 Watari Nendoroid petite with no hat

Paul Nakauchi as Watari in the Netflix film 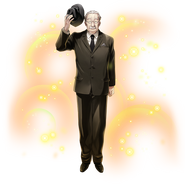 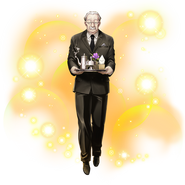