Death Note: Kira Game
Wammy's House is one of several orphanages established by Quillsh Wammy (also known as Watari). It was founded in Winchester, England, and was initially designed to be a training facility for especially gifted children. The most accomplished of these children was L Lawliet. After L's success as a detective, the goal of Wammy's House became to produce a successor to L.

The orphans use aliases rather than their real names, which are kept secret. In addition to these aliases, some notable graduates are assigned a letter by Watari. Roger Ruvie runs the orphanage while Watari travels with L, and when Near takes over as the new L, Roger takes over the role as Watari.

The orphanage is first introduced in chapter 59 (shown briefly in the anime equivalent episode 26) when Roger Ruvie, a friend of Watari's and the current head of Wammy's House, learns of his passing. At the end of the chapter, he also learns that L is dead and informs the two top students of the orphanage, Mello and Near. As L had not yet decided which of the two would be his successor, Roger offers the position to both, encouraging them to work together. Near is accepting of the idea but Mello refuses and leaves the orphanage. While his whereabouts during most of the five-year timeskip are unknown, he joins the Mafia in America three years after leaving Wammy's House. Near and Matt depart from the orphanage at some point during the timeskip, during which Near gathers information on the Kira case from scratch, as Watari deleted all the information L had gathered when he died. He takes this information to the President of the United States and creates the SPK. Matt's whereabouts and activities after leaving the orphanage remain unknown in canon.

When Light Yagami learns of Wammy's House, he sends Aizawa and Matsuda to investigate. As both L and Watari are dead, Roger tells the two detectives what he knows, including information on L's two successors. However, as even Roger does not know their real names, and there are no photos left of them, the only evidence of their identities that the investigation team and Light have to go on are two portraits drawn by a former resident named Linda, who has since become a professional artist.

When Mello learns that Kira needs to know a person's face to kill, he tracks down Near to reclaim the only photograph that exists of him. Near gives Mello the photo and tells him that he has made sure that anyone who knew him at Wammy's would not divulge information about him.

Later in the series, Matt, having been contacted by Mello, joins up with Mello in the race to catch Kira. They both die shortly before the finale, however, as a consequence of kidnapping Kiyomi Takada. Their actions before their deaths were vital to solving the case, and Near credits Mello's plan in the final confrontation with Light. He states that neither could have beaten Kira alone, but together, he and Mello surpass L. In the epilogue, Near is shown to have become the new L, with Roger in the role of Watari.

In the post-series one-shot, Near reveals that none of the children in Wammy's House ever saw L's face or directly spoke to him, only having heard him once through a monitor broadcast when he revealed his true reasoning behind being a detective. L favored Mello and Near as candidates to become his successors due to their refusal to question him and a "nasty look" in their eyes.

– Indicates that the character does not have a letter.

† Indicates that the character is now deceased.

X, Y, and Z - Only briefly alluded to at the end of Death Note: Another Note, they are referred to by Mello as three children who appeared in the "Detective Wars" bio-terror case with L.

Various other children are depicted in both chapter 59 and the one-shot special's flashback, though none are given any names.

In Death Note: Another Note

In the novel Death Note: Another Note - The Los Angeles BB Murder Case, Mello's recollection of Wammy's House is somewhat different, as he attests to having known and met L, who told him of three cases he had worked on (the BB Murder Case being one). The novel gives more insight into Wammy's House, characterizing it as more of an institution that causes would-be successors to feel pressure to succeed L. The first child in line to be L's successor, A, eventually committed suicide due to this pressure, while B (the next successor in line) ran away and later becomes a serial killer more commonly known as "BB" or Beyond Birthday.

In L: Change the WorLd

At the end of L: Change the WorLd, L, with only two days left to live, brings the "Boy" to Wammy's House. He names the "Boy" as "Near" and leaves him in the care of the orphanage. In the film, this is not the same Near as in the manga and anime.

The book mentions several other graduates of Wammy's House. Many are represented by letters on L's mailing list, though it is implied that some of these graduates are deceased. One graduate, K, has become a member of a bio-terrorist organization. Another, F, dies early in the novel on a rescue mission in Thailand.

Wammy's House is recalled by Near in a flashback in Death Note Relight 2: L's Successors, and in the flashback, some characters are shown in their younger years (like Mello), or they look exactly the same (like Near). There are also other children who appear in the flashback and are not named. They present what the children normally do in Wammy's House.

Near on the computer in the Wammy's House library

Near stacking dominoes in Wammy's House 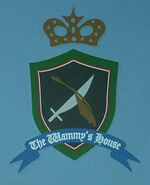 Wammy's House coat of arms in the film series