Gevanni is a younger man with black hair. He lets his bangs hang down just over his light-blue eyes. He's always seen wearing a black suit and he often keeps a gun on his person.

Gevanni is very talented, having skills which include lock-picking, investigating, monitoring and following suspects, and the ability to forge writing. Even after numerous deaths within the SPK, Gevanni remains a loyal member; this is indicative of his trust in Near. Moreover, he plays a key role in Near's plans and becomes essential to solving the Kira case by following Teru Mikami and subsequently forging a Death Note.

Series creator Tsugumi Ohba described Gevanni as a "good-looking hotshot" who received an invitation to join Near's team because of his ridiculously amazing skills. According to Death Note 13: How to Read, "the Kira case couldn't have been solved without him." The book also states that Gevanni likes "ships in bottles" and dislikes "unreasonable superiors."

In most of his early scenes, Gevanni comes across as being in charge of the SPK's computers and communications, such as when he puts Near through to "L" (Light Yagami) during one of their online confrontations, or when he re-establishes communications when the SPK moves to a new headquarters. He also drives Aizawa to and from the SPK's headquarters for a meeting with Near. Gevanni starts to play a more important role when the team moves to Japan. When Near suspects Teru Mikami of being the new Kira, Gevanni is assigned to shadow the young prosecutor full-time. His meticulous analysis of Mikami's personal habits plays a role in both Light's and Near's plan but ultimately allows Near to realize Light's true intentions and, as such, allow Gevanni to swap the real Death Note with a fake, forged in record time by Gevanni and Rester.[3]

In the one-shot chapter, set three years after Light's death, while he does not have any speaking lines or real involvement, Gevanni can be seen with Anthony Rester and Halle Lidner during Near's broadcast to the world as the new L.

Gevanni and Rester shortly after the founding of the SPK 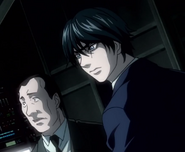 Gevanni aims his gun at Mello 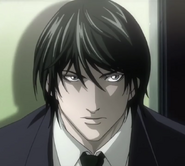 Gevanni watches Mikami use a notebook 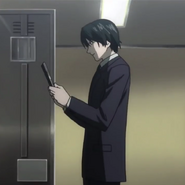