Shiori is a young woman, likely the same age as Light. She has long, dark hair and dark eyes.

Shiori is a To-Oh University student who dreams of working in law enforcement. She feels some envy stemming from Light's good grades.

Shiori has a solid sense of right and wrong and is comfortable expressing her convictions. When Light takes bets for a basketball game and takes everyone's money, she calls it dirty money. Shiori disagrees with Kira's methods, stating that she does not like the terror they incite; she believes that the law should judge criminals. She argues with the "pro-Kira" Light, unaware of the fact that Light is actually Kira.

Shiori is shown to be shy; she won't kiss Light even when no one's in sight because they're in a public place. After the busjacking, she is so shaken that Light takes her to a hospital. She is a loyal friend, and never shows any doubt of Light when Naomi Misora confronts him.

During the first film, Shiori and Light are regularly together, and they discuss current events such as Kira.

When Light comes up with a plan to get Raye Penber's name by controlling the criminal Kiichiro Osoreda to hijack a bus, Shiori is on the bus with him. When they get off the bus, Light tells Penber to find him later if he wants to discuss anything, and leaves quickly with Shiori, since she is deeply shaken from the event.

When Naomi Misora begins investigating the death of her fiance Raye Penber, leading her to suspect Light, she introduces herself to Shiori under a false name. Shiori introduces Naomi to Light, but when Naomi's real intentions become clear, Shiori is quick to defend Light, and she and Light walk away.

Light orchestrates Shiori's death. According to the instructions in the Death Note, Naomi kidnaps Shiori, holds her hostage at Omei Art Gallery while trying to get a confession from Light, and then shoots Shiori once in the stomach and once in the chest when she tries to get away. Light does this by writing both Naomi and Shiori's names in the Death Note separately.

Shiori dies in Light's arms, and they kiss. As she dies, Naomi commits suicide by shooting herself in the head. Light uses this event as leverage to get onto the Task Force.

Shiori is posthumously in the second film, Death Note: The Last Name. Light and many others attend her funeral.

In an interview printed in Weekly Shonen Jump, the creators of the film stated that Shiori was added to the story to highlight Light's negative aspects. 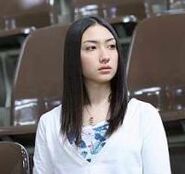 Retrieved from "https://deathnote.fandom.com/wiki/Shiori_Akino?oldid=65590"
Community content is available under CC-BY-SA unless otherwise noted.