Sayu Yagami (夜神 粧裕, Yagami Sayu) is the kind-hearted younger sister of Light Yagami who plays a minor role in the main storyline, remaining unaware of Light's possession of the Death Note and his role as Kira.

As a child in the first part of the story, her hair is pulled back in a ponytail with bangs hanging on the the right and strands of hair that frame the sides of her face.

As an adult during the second part of the story, she wears her hair down and her bangs remain swept to the right side.

In line with Sayu's age and grade in school she demonstrates age-appropriate behavior, such as watching shows starring Hideki Ryuga and asking Light for help with math homework. She seems to look up to Light, as she recognizes his intelligence and believes that he will become a quality detective.

In her university years, Sayu's attitude grows more mature, and she studies on her own without Light's help. According to Death Note 13: How to Read, Sayu likes shoes and dislikes alcohol.

Sayu is a 13-year old second-year student (8th grade) at Eishu Junior High School (英集中学校, Eishū Chūgakkō) at the beginning of the story. Her role at this point in the story is rather minor.

In the second part of the series, Sayu is attending college. She is kidnapped by the Mafia and taken to the United States, where she is held captive in order for the Mafia to gain the Death Note in the possession of the Japanese Task Force. Sayu's father trades the Death Note in exchange for his daughter's life. Sayu is taken back home to Japan, where she falls into a state of shock and is wheelchair-ridden for some time.

She is last seen at a Coming of Age Ceremony. It is up to the reader to decide what her mental state is. Tsugumi Ohba said that she hasn't "necessarily recovered," but it would not be possible for readers to tell from the picture.

Sayu is a high school student. Unlike in the manga and anime, Sayu is not kidnapped (the mafia play no role in the two films she appears in). Sayu remains ignorant of Light's role as Kira, instead being told that he was killed for his role in the investigation team. In Death Note: The Last Name, Sayu appears at the Sakura TV festival and causes a small incident when Kanzo Mogi dies and unknowingly temporarily shocks Misa Amane. The incident results in having Soichiro and Light pick her up leading to Misa chancing upon Light with her Shinigami Eyes. At the end of the movie, Sayu is sent by Sachiko Yagami to pick up Soichiro from the train station. They discuss how crime rates have risen following the death of Kira,

In Death Note: The Musical, Sayu is a fan of Misa. When Light first meets Ryuk, Sayu unintentionally interrupts them and she's confused why Light's acting strangely. He assures her it's nothing, and she has a present for him: tickets to Misa-Misa's concert. He agrees to go, and she leaves his room singing a few lines from Misa's song "Ready to Love."

The two later attend the concert along with Ryuk, and Misa opens by thanking her "beloved hero" Kira. After the concert, Light says that he liked what Misa said in the beginning, but Sayu didn't like it. Light asks Sayu, if she could say anything to Kira, what it would be, and she says that she'd tell Kira to be more like her brother. This leads into the song "My Hero," in which Sayu sings about how wonderful Light is, which makes Light uncomfortable. On the other side of the stage, resting from her performance, Misa sings the song as well, but she's referring to Kira. Light doesn't participate in the song, but he's symbolically center stage with Ryuk, with Misa on one side and Sayu on the other.

When Misa releases her secret message for Kira in the song "I'll Only Love You More," Sayu shares the song with Light so he gets the message. Sayu also sings a few lines of the song along with Misa.

After Misa is taken into confinement and gives up her Death Note, Rem goes to Light, and Light talks her into sacrificing herself to kill L. Sayu interrupts the conversation by knocking on Light's door and letting him know that dinner's ready.

In the ending song "Requiem," Sayu and her father symbolically come out on stage to mourn over Light's dead body.

Sayu and her brother are both aged up in the television drama. Although the Drama was meant to happen in Universe the same time as the Manga. Sayu is a high-school student and L refers to her as being strong-willed. As in canon, Sayu is into idol culture, and she recognizes Misa Amane when she first visits Light at home.

When her father trades himself with a hostage, Sayu grows frustrated and shouts that someone should kill the hostage-taker. This prompts Light to run home and use the Death Note to save their father's life. From Sayu's perspective, it seems that Light just ran off on her.

The circumstances of their mother's death leave a rift between Light and their father. When Light begins opening up to his father and showing an interest in his work, Sayu points out that it's uncharacteristic. She seems to take it as a good sign rather than anything suspicious.

Sayu is kidnapped in the show similar to her canon kidnapping. Shoko Himura abducts Sayu and conducts a trade with the Task Force for the Death Note. It is later revealed that Near/Mello is actually behind her abduction.

Sayu survives the series, and she presumably stays with a female family member who is possibly an aunt. Since Sayu's mother had previously passed away, after Soichiro and Light both die by the end of the series, Sayu is left with no immediate family. She does not find out about the circumstances of her father's death, and she believes that Kira killed him. As in canon, she never finds out that Light is Kira.

Sayu is portrayed by Reiko Fujiwara in the television drama.

Sayu's name and lifespan, as seen by Misa in Death Note: The Last Name 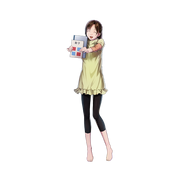