Made eye deal with

Elena Gazaeva (Елена Газаева)
Rem (レム, Remu) is the Shinigami who gives Misa Amane one of the Death Notes she had. Like Ryuk, Rem possesses two Death Notes; however, Rem did not get hers through trickery. The Shinigami Gelus, who had fallen in love with Misa, sacrificed himself to kill her destined murderer. In doing so he was reduced to dust, leaving only his Death Note. Rem delivered this Death Note to Misa, since it was her life he saved.

Rem's appearance is quite skeletal, with long, spinal cord-like arms and bone-like skin. Her features, such as her hair and the markings on her face, are detailed with a light-blue shade. The only exception for this is in the anime, where these details are purple. All other media, such as the movies and games, have the details as blue.

In the manga and anime, Rem tells Misa that she is a female Shinigami. In Death Note: The Last Name, this is not mentioned, leaving her gender ambiguous.

While Ryuk takes amusement in everything in the Human World, Rem is almost the exact opposite, viewing most humans with contempt. Also, while Ryuk is ambivalent to Light's success or failure, Rem actively assists Misa. This makes her equally as guilty as Ryuk of not displaying 'proper' traits for a Shinigami to have. She is even willing to sacrifice her life to defend Misa, as evidenced by her threat to kill Light should Misa die before her time. For Misa's sake, however, she still assists Light in his schemes.

Takeshi Obata said that Rem is his favorite Shinigami since she is "a good person," even though she is a Shinigami.

After Gelus gives his life to save Misa, Rem delivers his Death Note to her. From that point on, Rem looks after Misa and attempts to keep her from harm. Rem shares with Misa the secret to killing a Shinigami: have them kill in order to save someone they favor. After meeting Light, Rem becomes aware of his intention to use Misa as a tool, and when Light tells Misa he would kill her if she does not follow his orders, Rem declares to Light that she would kill him if he harms Misa.

When Misa impulsively meets Light against his orders, Light takes advantage of Rem wanting to save Misa in order to get Rem to kill L, claiming that it's for his, and consequently Misa's, happiness. Rem agrees to take part in this plan in spite of her hating Light. However, this plan is foiled when Misa is taken into custody by L under suspicion of being the Second Kira. During this time, Misa begs Rem to kill her, but she instead has Misa forfeit ownership of the Death Note and lose her memories.

Shortly after, Rem confronted Light at his house, telling him of Misa having relinquished her memories, and threatened to kill him should he not save Misa. As a response to this, Light told her to erase his memory and give the Death Note to someone who is greedy and does not follow justice, so she gives it to Kyosuke Higuchi, a member of the Yotsuba Group. Rem possessed Higuchi since he had the Death Note, and grows to detest him, now growing to like Light. She manages to tell Misa the current situation and that Higuchi is indeed the third Kira. After Higuchi's arrest, Soichiro Yagami, Touta Matsuda, Shuichi Aizawa, Kanzo Mogi and L meet her when they touch the Death Note.

L begins asking Rem a variety of questions about the Death Note, with her not revealing anything that would incriminate Light and Misa. When Misa meets Light, Rem sees that Misa's lifespan has been halved yet again.

Light puts Misa in danger by making her continue to write names in the Death Note, leading Rem to be tricked into writing down Watari's name and L's real name in the notebook to kill them. This ultimately leads to her own death, as Light forces Rem into killing someone to save Misa's life, making Rem crumble into dust and leave behind a heap of dust and the notebook as her remains.

Rem in the film is much like her anime and manga counterpart. She is devoted to Misa and attempts to protect her at any cost, including giving her own life. In the second movie, Rem declares her love for Misa and her contempt for Light moments before her death. While her Death Note is left behind in the manga and anime, in the film, Rem burns her Death Note out of spite, saying that Light will not have it.

In Death Note: The Musical, Rem's role is very similar to canon, although her character and her feelings for Misa are more developed and central to the narrative.

Rem is introduced in the beginning in the Shinigami Realm, watching the humans. Ryuk complains that he is bored, and the two of them mock humanity. Ryuk then drops his Death Note into the human world, which startles Rem.

Rem returns at the beginning of Act 2, immediately after Misa picks up a Death Note. Rem explains that Gelus had died saving Misa from the stalker she was running from. Misa asks about Kira because she wants to find him, so Rem explains the trade for the shinigami eyes. However, Rem is reluctant to make the deal because she doesn't think it's worth the sacrifice and Kira is dangerous. Misa insists on the trade, and Rem relents.

When Misa finally meets Light, the meeting does not go happily, and Rem is upset with how things turn out. She laments the situations with Ryuk, who is amused, and Ryuk reminds her not to break the rule about helping humans.

Four days into Misa's confinement, Misa asks Rem to kill her. Rem instead convinces her to give up ownership of the Death Note, which Misa agrees to do although it pains her to lose her memories of her connection to Light. Rem laments that Misa has forgotten her as well.

Rem goes to Light, having already figured out that Light is counting on Rem to sacrifice herself to save Misa by giving L's name to Light. Light tells Rem to write the manner of L's death exactly as he instructs, and Rem does so.

During the ending song "Requiem," Misa symbolically walks out on stage and sand runs from her fingers in a symbol of Rem's remains.

Rem performs the following songs in the musical:

In the 2015 Death Note television drama, Rem is initially very similar to her role in canon. She brings Misa Gelus's Death Note after Gelus's sacrifice and expresses some concern for Misa's well-being.

Rem does not end up sacrificing herself for Misa, and she survives the series.

Rem is voiced by Ayumi Tsunematsu in the television drama.

Obata said that when he heard that Rem was female, he decided to create a design contrasting with Ryuk's design, using a white body with "rounder" lines. He says that he used fashion collections to create her motif, describing her resulting appearance as if she wore a "really bizarre suit." He also said that Medusa inspired the design of Rem's head. 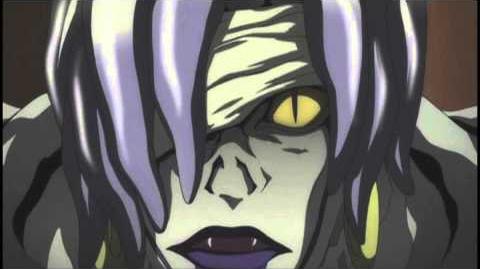