Reiji Namikawa (奈南川 零司, Namikawa Reiji) is one of the eight members of the Yotsuba Group.

Namikawa has smooth, long, black hair which extends to his back. He has brown eyes and long, thin eyebrows. He is usually seen wearing a black suit with a white tie.

Namikawa is the Vice President of Sales at Yotsuba and is described in Death Note 13: How to Read as the "most talented" of the board members who has the potential to "make it to the top" without Kira. However, he shows no noticeable qualms with partaking in the murder of Yotsuba's competitors, and sides with Kira until contacted directly by L.

One of Namikawa's most notable features is his intelligence. He is highly knowledgeable. At one point, he is able to fool Light Yagami (pretending to be L at the time) into revealing that Kyosuke Higuchi was the prime suspect of the Kira investigation team, much to the annoyance of the real L. He is perhaps one of very few people able to trick someone like L, a detective well-known for his own intelligence. At that point, Namikawa jokes that he is surprised that even L can be fooled (not knowing he actually tricked Light instead). He has tremendous social skills and an impressive ability to influence others.

Namikawa spent six years in the United States and graduated from Harvard University's Business Department. His father is the president of Yotsuba's United States division. Namikawa has a talent in Shogi at the professional 4-dan level. How to Read states that he detests useless subordinates.

He initially encourages the Yotsuba Kira, yet after receiving a telephone call from Light Yagami, he ceases participation and becomes an observer at the Meetings of Death.

On the night of Higuchi's arrest, he is called to a private meeting by Shingo Mido and Suguru Shimura to discuss who Kira might be. During this meeting, he is called by Light (who is still pretending to be L) and instructed to inform Higuchi of the special airing on Sakura TV, as well as to make sure that none of the other members of the Yotsuba Group attempt to interfere.

A little over five months after L's death, Namikawa is killed by Light along with the remaining Yotsuba Group members. In the anime, during a meeting, Namikawa went up to Shimura to shake hands with him. When Shimura attempted to shake his hand, Namikawa fell against him with blood trickling out of his mouth, having been killed by Kira.

In the 2015 television drama, Namikawa is similar to his manga portrayal. He is contacted by Babel (an alias of Near), as opposed to L, and calls Takeshi Ooi to alert him of the special broadcast on Sakura TV. He and the other six Yotsuba Group members survive the series. 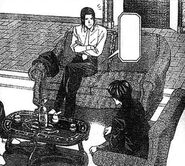 Add a photo to this gallery
Retrieved from "https://deathnote.fandom.com/wiki/Reiji_Namikawa?oldid=66115"
Community content is available under CC-BY-SA unless otherwise noted.