Made eye deal with

Midora is a salamander-like Shinigami with a long tail. She is light green with dark spots on her head, dark yellow eyes, and a large, crooked smile. Death Note 13: How to Read states that "because of her size, her tail, and her spotted body, she is well-known in the Shinigami Realm." She is also one of the few Shinigami who wears no accessories.

Midora does not appear to be as serious as Rem, but she is also is not as ditzy as Sidoh when it comes to current or past affairs in the Shinigami Realm and Human World. This is demonstrated by her laissez-faire attitude about giving her spare Death Note to a seemingly foolish person whose identity is never revealed, named C-Kira, or Cheap Kira, by Near.

Midora develops a liking to bananas similar to Ryuk's love for apples. In the last panel showing C-Kira, Midora is eating a banana while surrounded by banana peels. In line with her salamander-like appearance, Death Note 13: How to Read states that she likes humidity and dislikes dryness.

In the story, Midora bribes the Shinigami King with thirteen apples taken from the Human World in exchange for a spare Death Note she can drop on Earth. 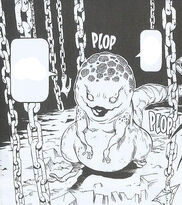 Midora having returned to the Shinigami Realm 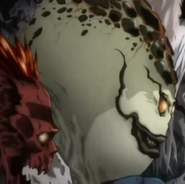 Midora in the first anime opening

Zoom-in from Blanc et noir
Add a photo to this gallery
Retrieved from "https://deathnote.fandom.com/wiki/Midora?oldid=64087"
Community content is available under CC-BY-SA unless otherwise noted.