Death Note Wiki
Register
Don't have an account?
Sign In
Advertisement
in: Humans, Controlled by a Death Note, Deceased,
and 4 more

Episode 2
Matsushiro Nakaokaji (松代中岡, Nakaokaji Matsushiro) is a criminal killed by Light Yagami as a part of an experiment to test the Death Note.

Nakaokaji is an older man with short, dark-colored hair, a broad nose and stubble.

Nakaokaji committed six incidents of robbery and murder with a knife. He held a parlor and killed one man. He held a convenience store and killed two. He held up a karaoke bar and killed three. Nakaokaji, not apprehended, is suspected by the police to be hiding in the Tokyo area.

Light writes in his Death Note that Nakaokaji bleeds to death. He holds a convenience store in Tokyo with a knife, is stabbed in the stomach, and dies at 1:30 AM. When Light reads the newspaper the following day, he sees that the Death Note accurately kills him. A store employee had stabbed Nakaokaji to death as security cameras rolled. The picture depicting Nakaokaji's wound graces the newspaper that Light reads.

Nakaokaji appears in the film Death Note: The Last Name.

Nakaokaji has the same role in the Death Note television drama. One notable difference is that he dies by stabbing himself in the stomach, as written by Light in the Death Note. Light reads about his death in the morning paper, and since he is satisfied with the results, he writes down Kiichiro Osoreda's name next. 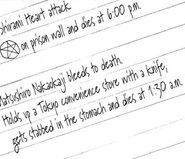 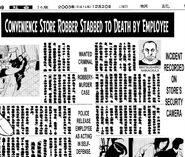 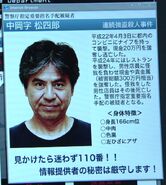 Nakaokaji's profile in the MPD database in the TV drama

Nakaokaji's name written in the Death Note in the TV drama

Death reported in the paper in the TV drama
Community content is available under CC-BY-SA unless otherwise noted.
Advertisement