Humans Who Touched It

Has a piece of the Death Note hidden inside of it, which was used to kill Kyosuke Higuchi and Kiyomi Takada; also used in a failed attempt to kill Near
This is a watch that Light Yagami receives as a present from his father after entering university, and it serves an important plot device in the series.

When Light loses his memories by relinquishing his notebook, he plans to regain ownership by killing its new owner. In order to do this, he cuts a piece of paper from the Death Note and places it in a compartment that opens from the bottom of his watch. The compartment only reveals itself when he pulls the crown of his watch four times with less than a second in-between pulls.[1]

The watch's mechanism is used by Light to subtly kill Takada and make her set fire to her surroundings in order to get rid of any evidence that she killed Mello with paper from the Death Note. Light's subordinate, Mikami, not knowing about Light possessing a snippet of the Death Note serves as their undoing when Mikami is forced to take out the real Death Note, exposing it to Near.

In the final stand against Near, Light attempts to use a piece of the Death Note to kill the former as a last resort, but his plan is thwarted by Matsuda after he shoots him. The snippet is then confiscated by Aizawa.[3]

In the novel L: Change the World, L wears Light's broken watch throughout the story as a memento.

In one scene, L and Maki Nikaido talk about Kira and how L failed to catch him since Kira died. L wraps his hand "protectively" around the watch. Maki asks him what he's thinking about, and L says, "I was thinking about my only friend." She asks if the broken watch belonged to the friend, and L says yes.[4]

Light's watch in the films 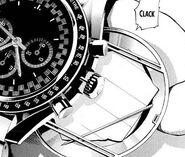 Showing the piece of the Death Note inside of Light's watch