L is a man in his mid-twenties, with large, bagged eyes and brown skin. Though above average in height, his hunched posture makes him appear shorter. He is usually seen in a black hoodie.

L initially appears calculating and composed, coordinating cases around the world. He is shown to be profoundly intelligent and driven, but also reliant on Watari for many of his basic needs - even his sleep schedule. For all his intellect, L is immature and prone to rage when separated from Watari or otherwise feels he has lost. This rage leads him to forsake his principles (such as never carrying firearms) in an effort to catch "Kira".

Separated from Watari, he struggles in the outside world. Used to getting his way, L is unconcerned by the effect his strange posture and superior attitude have on others.

L has a voracious sweet tooth, and uses sugar to keep his mind active when sleep-deprived.

L was raised in an orphanage in upstate New York, part of a group trained to become the world's greatest detectives. To join the program, he was confined in a mind-warping room for months, with no way out. It is unknown how precisely this confinement affected him. The school was abandoned soon after L joined, however, and he has since been trained and managed by Watari.

By 2017, L was regarded as one of the world's greatest detectives, albeit "eccentric".

L starts the movie at the top of his game, having seeded various major databases with the names and faces of obscure criminals. When the Japanese gang rivals assigned to Seattle die in a nightclub massacre, L and Watari travel to the United States. There, they meet up with the FBI and local police and take inventory of all their information on Kira. Knowing there is no hope if Kira can kill anyone, L appears on live television mocking Kira. Since he doesn't die, the investigation assumes Kira cannot kill without a person's name or face. The FBI investigators, however, die in a mass suicide. Light is deduced to be the primary suspect, so James speaks against Kira on live television and isn't killed. L confronts Light directly to further prove his guilt.

When Watari vanishes, L's world begins to unravel. He visits the Turner household to demand the safe return of Watari. To James's frustration, he orders agents to ransack the building.

When Watari is killed, L's rage fully consumes him and he takes a gun in an attempt to hunt down Light Turner and avenge his mentor, but is knocked unconscious by a Kira worshiper before he can fire.

After being taken into custody by the police, L is able to avoid prison due to his contacts in the government, but he is deported and is to be sent back to Japan. Before his plane takes off, L remembers Mia's involvement with Light and he breaks into Mia's house. He searches through her belongings and finds a page of the Death Note with the names of the FBI agents on it. Out of anger, L grabs a pen and considers writing Light's name down.

Watari is an extremely important figure in L's life. A coordinator, liaison, manager, mentor, and father figure, L relies on him for nearly everything.

L respects James Turner's commitment to the law, despite popular acceptance of Kira. James puts up with L's odd habits and dangerous plans, but initially objects to his son being investigated.

L, suspecting and confronting Light Turner, quickly proves to himself that Light is Kira. When Light separates Watari from him, however, L's full fury is directed at the teen killer. 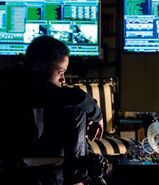 Compared to most adaptations, L's character and background have significant changes. Prior to the events of the film, L was raised in an orphanage in New York state, where he and several other children were trained by Watari to become the greatest detectives in the world. The orphanage was eventually abandoned soon after L's departure. L also rarely took time to sleep and required Watari's aid to maintain his health.

LaKeith Stanfield, the actor portraying L, watched the Death Note Anime and read the Manga to find inspiration for his character. He initially envisioned the story as closer to older versions, and adapted his portrayal to work with changes as they came up, especially L covering his face.

Regarding his character's race and online controversy, he found it exciting to have a different portrayal and invited viewers to make their own conclusions. [2]

Community content is available under CC-BY-SA unless otherwise noted.