Ill Ratt (イル・ラット, Iru Ratto) is a member of the SPK who acts as a spy for Mello.

Ratt has short brown hair and is seen wearing a black suit and tie.

After the founding of the SPK, Ratt walks outside their headquarters and asks a citizen to borrow his phone, supplying Mello with information he has obtained about the Death Note.

Ratt is briefly seen being ordered by Steve Mason to get John McEnroe to pick up Soichiro Yagami and his daughter Sayu after she had been kidnapped by Mello and the Mafia and traded for the Death Note. When Mello obtains the notebook, he uses it to kill the majority of the other SPK members, including Ratt, who commits suicide by shooting himself in the head. With this, Mello ensures that Near will be unable to use the spy to find the Mafia.

In the anime, Ratt is not revealed to be a spy.

In Death Note Relight 2: L's Successors, Kiyomi Takada sends Ratt's photo to Teru Mikami. With his Shinigami eyes, Mikami sees that Ratt is using an alias and writes his real name in the notebook. As Ratt lifts his gun before shooting himself, he momentarily aims at Near, causing Halle to scream out.

In Death Note 13: How to Read, Takeshi Obata said that while designing the SPK members, he drew Ratt as being "suspicious looking" to further his character as a spy.

Ratt's name and lifespan seen with the Shinigami eyes 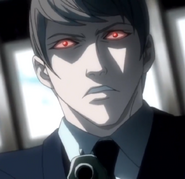 Ratt under control of the Death Note in Relight 2
Add a photo to this gallery
Retrieved from "https://deathnote.fandom.com/wiki/Ill_Ratt?oldid=65592"
Community content is available under CC-BY-SA unless otherwise noted.