Jealous (in most other versions)

Ronaldo Júlio (Brazil)
Gelus (ジェラス, Jerasu) is the Shinigami who gave his life protecting Misa Amane. He appears in a flashback when Rem explains to Misa how to kill a Shinigami.

He is a small, doll-like Shinigami whose appearance suggests that he was poorly sewn together from mismatched fabric. Some of his skin is blue in color, and other patches are white. He can speak through his stitched mouth, and more stitches extend across his body. Despite having two eye sockets, his single eye is yellow.

Gelus has a rare personality compared to most Shinigami, as he cares deeply for humans. Gelus is kind and quiet and has the desire to help others.

In the flashback, Rem recalls Gelus watching over a younger Misa Amane in the Human World. Knowing that it was Misa's last day alive, she watches with him. Having fallen in love with Misa, Gelus uses his Death Note to kill Misa's destined murderer, against Rem's protests.

Gelus is reduced to a pile of glittering dust as punishment for extending a human life, leaving behind only his Death Note. In the anime, he is shown to drop the pen and start crying, before his eye disappears and he disintegrates. Rem delivers his Death Note to Misa because it was she whom he saved, as she feels it is right.

Gelus appears in Death Note: The Last Name. His role in the film is the same as it is in the manga and anime. He saves Misa from Ryotaro Sakajo, who is an assistant director for her show Misa-Misa's Happy Sweets. His Death Note falls beside Sakajo's dead body.

Gelus's appearance in the film is slightly different from his anime appearance, as he appears as various shades of brown rather than blue and white.

Gelus exists in Death Note: The Musical, but he is not directly seen. His role is essentially the same, as he saves Misa from an unseen stalker. As she runs from her encounter with her stalker, Misa comes across Gelus's Death Note which has fallen in her path. Rem follows and explains what happened.

Gelus exists in the Death Note television drama, but he is not directly seen. His role is essentially the same. He saves Misa from her stalker Tsutomu Yukida, who is a security guard at her Ichigo Berry concerts. Misa is knocked out during the encounter, and when she wakes up, Gelus's Death Note falls to the ground beside her. Rem follows and explains what happened.

In the drama, Gelus's Death Note is red instead of black.

Obata said that Gelus appeared to be "a really beautiful" Shinigami in the thumbnails but decided to use his concept instead; he designed Gelus with a patchwork body since Gelus is a "really pitiful character." Obata said that he believed that readers could relate to him and sympathize with him more if he looked "pathetic" and "stupid" instead of "beautiful."

Obata added the trait of Gelus having difficulty writing names into the Death Note.

He also said that at first, he placed "detailed patterns" on Gelus' Death Note. When deciding that the patterns looked "too pretty" Obata covered the patterns with black, leaving the white portions visible. The text of the notebook is in a "Shinigami language." 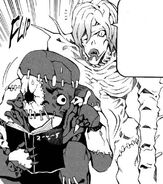