Deridovely's form is humanoid in appearance. He wears a bone mask and his body is covered in what appears to be white linen. He carries a scythe, making him thematically similar to the classical depiction of a grim reaper. He also has long, black hair and lush, red lips.

Deridovely usually gambles with Gook and Ryuk, though it is implied that Ryuk doesn't often participate.

Deridovely is seen gambling with Gook in the first episode and wins a game against him. Gook invites Ryuk to join them, but Ryuk is distracted by the Human World. Five days later, Ryuk tells Gook and Deridovely that he dropped his Death Note in the human world and leaves. Thereafter, Deridovely is absent from the series, only appearing in flashbacks in which Ryuk tells Light of the Shinigami Realm.

His last official appearance in the series was in the OVA Death Note Relight 1: Visions of a God, where an unnamed Shinigami is speaking to him, Gook, and Zellogi, asking where Ryuk is.

Takeshi Obata said that he based Deridovely on a "gross-looking transparent insect." Obata believes that the bandages aid the design.

Deridovely in Death Note 13: How to Read 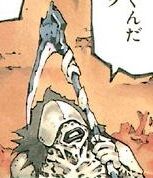 In the anime
Add a photo to this gallery
Retrieved from "https://deathnote.fandom.com/wiki/Deridovely?oldid=65829"
Community content is available under CC-BY-SA unless otherwise noted.