It contains all of the original 108 chapters of the series. It also contains the Death Note One-Shot Special chapter, which is the chapter's first reprint since it was originally published in Weekly Shonen Jump, and it is the first time the chapter is published in English.

The volume was well-received, with many reviewers joking that it is big enough to actually kill someone with it. "Forget having your name written in the deadly notebook; this Death Note could prove lethal if someone dropped it on your head."[1] 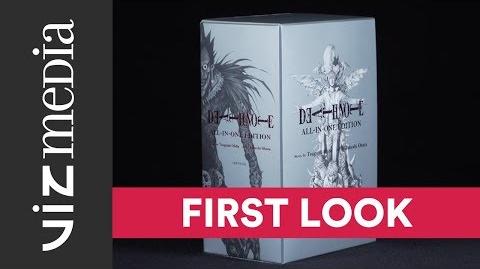 Ad in Weekly Shonen Jump
Add a photo to this gallery

Retrieved from "https://deathnote.fandom.com/wiki/Death_Note_All-in-One_Edition?oldid=64935"
Community content is available under CC-BY-SA unless otherwise noted.