Death Note 13: How to Read, also known as Death Note: How to Read 13, is an encyclopedia-style guide to the Death Note manga series, including character bios, storyline summaries, interviews with creators Tsugumi Ohba and Takeshi Obata, production notes and commentaries and a bonus: the pilot chapter of the manga. It also includes Ryuk's Human Observation Journal.

Everything contained within this book is official, written by the original author and artist, and is considered canon for the manga series.

The Japanese edition gives the characters' heights in centimeters.

Viz Media's official English release incorrectly converts the characters' heights, so some characters are listed as a few inches shorter than they should be. Viz apparently converted from centimeters to feet, and then used the remaining decimal as inches instead of properly converting to inches. For instance, Light is 179 cm, which correctly converts to 5.87 ft, or 5' 10½", but Viz gives his height as 5' 8", apparently taking the eight inches from the .8 feet. 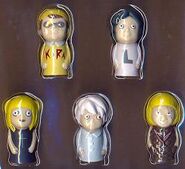 Retrieved from "https://deathnote.fandom.com/wiki/Death_Note_13:_How_to_Read?oldid=62547"
Community content is available under CC-BY-SA unless otherwise noted.