Shinigami
Humans
A Death Note is the titular supernatural notebook used by the Shinigami to sustain their life, as well as a principal figure in the Eponymous series.

While appearing as your typical black notebook, Shinigami are able to choose what adorns their notebooks' covers, if anything. Most notes, however, such as Rem's, are plain black and lack writing on their covers, but Shinigami occasionally write their name on it as a joke.[1] Death Notes can also be red or white, though these types are rare.

Depending on the era, Death Notes change their appearance to match said era. They will be a scroll in Old Japan or appear similar to the Old Testament in medieval Europe.[2] The inside of a Death Note looks like that of a school notebook and contains ruled white pages. The notebook is activated when a human's name is written in it. Regardless of how many names are written in it, the notebook will never run out of pages. Death Notes are made from a material unknown to human science; however, they nevertheless feel and look like regular notebooks, and it is possible to rip and burn the pages.

The purpose of the Death Note is to take human life, thereby increasing the lifespan of the Shinigami who uses it. There are many rules governing how the Death Note can be used, though the most pivotal rule is that "the human whose name is written in this note shall die." The King of Death is apparently the one that makes and controls the rules of the Death Note, where he is able to make new rules as he sees fit.

A Death Note can be used by a human, although their lifespans do not increase by doing so. Historically, humans have either killed other humans with the Death Notes or ended up burning and therefore destroying the Death Note for any number of reasons. Ryuk is the first rogue Shinigami shown in the series, though it is stated early in the series that there have been Death Notes dropped in the human world before.

A total of four notebooks are present in the Human World during the manga and anime series. These notebooks are listed here along with names of the people who gained ownership. Here, the notebooks are referred to using the name of the Shinigami who originally owned it. For example, the first notebook used by Light Yagami is called "Sidoh's Death Note."

How to Use It: The Complete Rules

This section reveals the rules governing the use of the Death Note. They have been divided into four parts: 1.) How to Use It, 2.) Ownership, 3.) the Shinigami Eyes, and 4.) the Shinigami Rules. Here, the rules will be explained by highlighting specific scenes from the series.

Use in the story: Realizing that people sharing the same name cannot be killed at once, L uses the name of an idol singer named Hideki Ryuga when he approaches Light.

1.2 Entering the Causes and Conditions of Death

Use in the story: Light was able to wipe out all the FBI agents by writing their conditions of death ahead of time and having Raye write in the names. 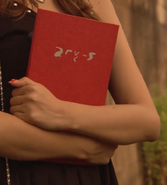 Arma with a white notebook from Death Note: Light Up the NEW World

the notebook from the Netflix adaptation