Anthony Rester (アンソニー・レスター, Ansonī Resutā) is the SPK's second-in-command and its operations leader. He works closely with Near, who refers to him as "Commander Rester," implying a military background.

Rester is a tall, well-built man with graying hair and grayish eyes. In the anime, his hair is light blond and his eyes are light blue. He maintains a kempt, professional appearance. He is usually seen wearing a white dress shirt and black tie with black trousers, and in the United States, he wears a shoulder holster.

Rester is professional, calm, and dedicated to both Near and the SPK. Death Note 13: How to Read states that he can be seen as Near's guardian. Near appears to trust Rester greatly and often reveals some of his thoughts and plans to him only.

Like several other members of the SPK, Rester uses an alias throughout the Kira investigation. He is the only member whom Near is sure has never been seen by Kira.

Rester assists Near in urgent matters. While Stephen Gevanni and Halle Lidner receive tasks from Near that place them in different undercover positions during the Kira case, Rester is the SPK member most frequently found at Near's side. In addition to his duties as operations leader, he also helps Near with actions he is unused to completing alone, including booking a flight and flying on a plane.

The One-Shot Special, set three years after the main series, reveals that he continues to work with Near, Lidner, and Gevanni.

Gevanni and Rester shortly after the founding of the SPK 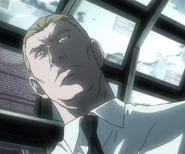 Rester aims his gun at Mello

Retrieved from "https://deathnote.fandom.com/wiki/Anthony_Rester?oldid=65824"
Community content is available under CC-BY-SA unless otherwise noted.